To say that I am glad this is a three-day weekend is a major understatement. The last few weeks have been incredibly busy. I’m so glad that I had a chance to finally unwind a bit. Even though I’m off tomorrow, I wanted to stick to my routine and get my shopping and prep done today. Hubby had to go to the office for a while, so I took advantage and hit the grocery store. As you know from last week, my goal is to get out of the store with a bill of $100 or under. Today I flunked. I spent $125 – but I did stock up on a few things, and it included $16 in cat litter which I typically don’t include in my grocery category. So really, I didn’t do too badly. Here is my loot from today: 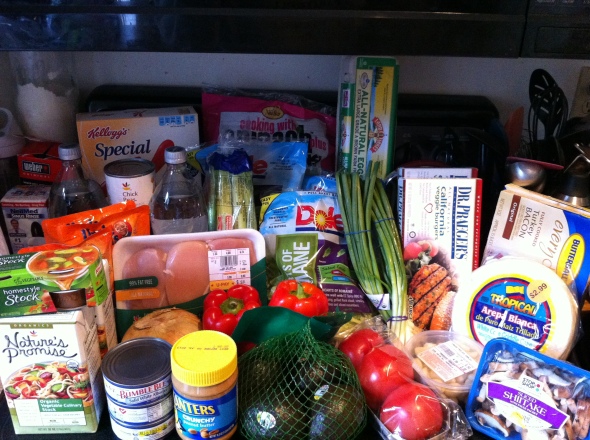 Not everything made it into the picture either. I had a few other veggies that I had already put away. Now you probably notice one thing that is not typical for me – and there were actually two things that don’t usually make it into my shopping cart. I made a side trip to a small, local produce market that specializes in Latin American foods. I have spent a lot of time in Colombia, so there are times when I get cravings for food from my “second home” (more about that in another post!). I’m sure you see the tomatoes, scallions, and avocados – those are typical fare, along with these two things:

Arepas are delicious – but very plain all by themselves. I happen to like them toasted with butter  – like you would have regular toast, or with mashed avocado and a little bit of salt. I like to serve them alongside eggs scrambled with tomato, scallions, and cilantro. They can also be topped in lots of different ways, or stuffed with cheese. The queso (cheese) is like what I have there in my scrambled eggs. It’s also great just crumbled on top of a toasted arepa. These are two of the things that help me with my Colombian “homesickness.”

One of the other things that helps me is cooking traditional Colombian food. One of my favorite places to find recipes is a blog called My Colombian Recipes, written by Erica, who was born and raised in Colombia. I have made many of her recipes including Arroz con Pollo (anything with chicken and rice is a hit at my house) and Ajiaco Bogotano (Colombian chicken and potato soup). This was the first time I tried Pollo Sudado – a traditional Colombian chicken stew. As it was cooking, all I could think was “This smells like Colombia!” I made a few variations – but nothing that changed the character of the recipe…just the amounts of veggies. All credit for this one definitely goes to Erica – and it was a real winner with my hubby!

8 chicken drumsticks or thighs without the skin (I used 6 boneless, skinless thighs because that’s what I had on hand)

2 cups chopped tomato (I used fresh – you could probably use canned diced, but the flavor won’t be the same)

8 small potatoes, peeled and cut in half (I used baby reds – that’s what I had)

In a large pot, heat the oil over medium heat. Add the onion and the red pepper and sauté until onions are translucent – about 3 minutes.

Then add the tomatoes, garlic, salt, and pepper and sauté for about 5 more minutes.

Add the chicken, water, chicken bouillon, Sazón Goya, and cumin. Bring to a boil and then turn heat to low. Cover and cook for about 25 minutes, stirring occasionally.

Serve over white rice. Add more fresh chopped cilantro if desired. I also like to add some fresh avocado chunks!

One of the things I love about this is that it is so simple, yet it is really delicious and it reminds me so much of “home”. Plus, there aren’t too many times when eating potatoes AND rice in the same bowl is actually considered okay!

I hope you enjoy this recipe – and be on the lookout for my post about Colombia, and why I love it so much. It’s going to take me a while to get that all written down… 🙂

Check out KLUTCHClub for the latest and greatest health products!

eatingwelllivingthin.wordpress.com/
Eating For Balance
Yeah...imma eat that.
this life is sparkling

never let anyone dull your sparkle

A new start- the beginning of a healthy lifestyle, a healthy mind and a new life

Becoming a healthier me one step at a time!

Baking. Photographing. Creating. Trying to get by.